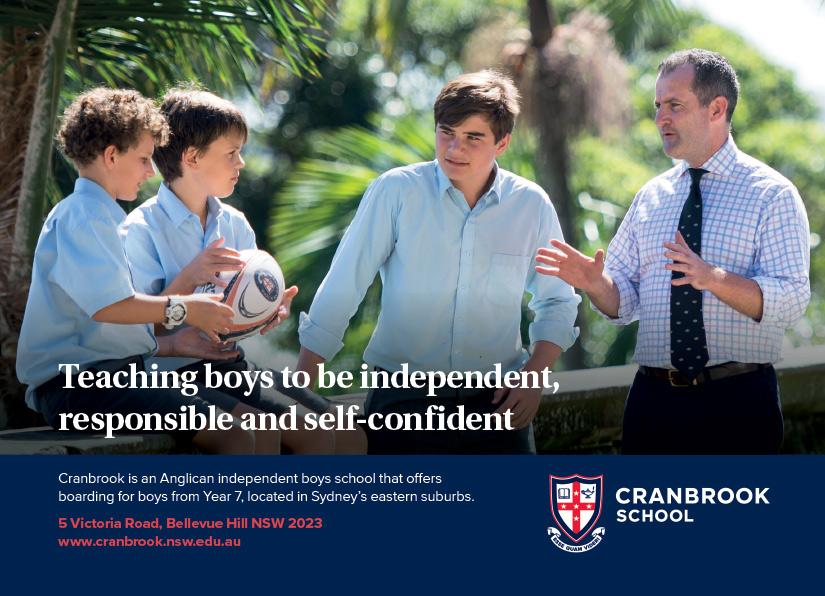 The school mottoo esse quam videri means 'to be rather than to seem to be'.

St Michael's Pre-school
Gilliver Avenue, Vaucluse NSW 2027
Phone 02 9371 9214
www.cranbrook.nsw.edu.au
Cranbrook is a world class school which encourages and enables all our students to explore, enjoy and fulfil their potential.
Cranbrook is an independent day and boarding school for boys, Pre-school to Year 12.

Cranbrook School is an Anglican independent day and boarding School for boys, Pre-school to Year 12. Founded in 1918 in order to uphold the great tradition of a liberal educational philosophy, and continues to do so by instilling, and supporting the development of academic rigour.

At Cranbrook our vision is to be a world class School which encourages and enables all of our students to explore, enjoy and fulfil their potential. We lead our students to discover and make the most of their talents, give of their best and thrive in and love the pursuit of excellence.

As a School we energise the educational environment by offering a rich and distinctive schooling both within and beyond the curriculum and give powerful pastoral support. We uphold the character of our Anglican foundation in order to promote the moral and spiritual development of each student and foster the principles of service.

Cranbrook builds resilience and confidence so that each student can face the challenges of the twenty-first century with personal confidence, intellectual versatility, academic hunger and optimism. We inspire and support them to respect the integrity of differences, lead adventurous, courageous and generous lives contributing to the betterment of society.

Our 2014 boys achieved outstanding HSC results, receiving 252 merits in total placing Cranbrook as the second top non-selective independent boys’ school across the State. Two Cranbrook boys achieved the highest honour coming first in their course and top of the State in Visual Arts and Design & Technology. Ten Cranbrook boys also received places in the State for Biology, Ancient History, Chinese Beginners, Drama, English Extension, Earth and Environmental Science, Economics, Legal Studies and Music. In addition, more than 70 per cent of boys achieved a score of 90 per cent or above in a least one subject placing them on the Distinguished Achievers List indicative of our School’s focus on excellence across the curriculum.

Our 2014 boys’ remarkable achievements reflect our continued focus on academic rigour and creative excellence. As a School we have raised the bar, expanded every boy’s academic horizons, and cemented the foundations for their future success.