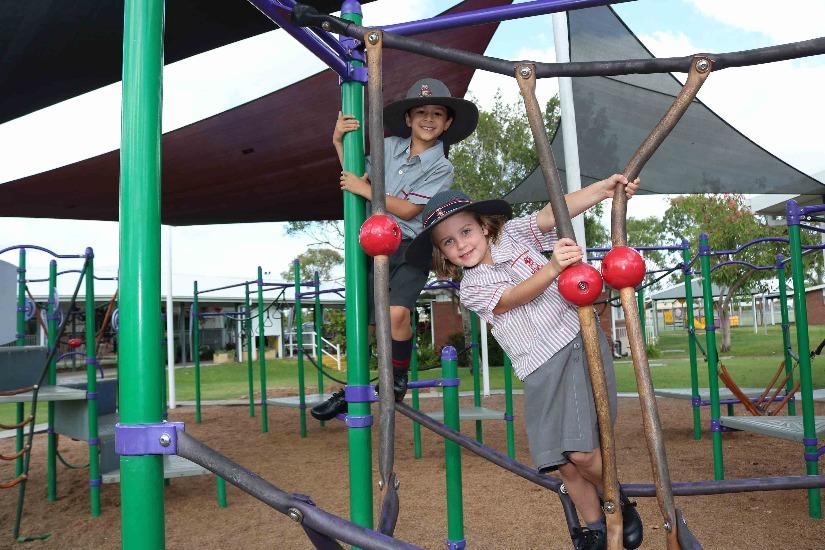 At Whitsunday Anglican School, we pride ourselves on providing opportunities in learning and in life. Our students build confidence, character and skills that go beyond school, in a safe and nurturing environment that allows them to thrive. We challenge and support our students to be the very best they can be – in the classroom and beyond. From Kindergarten to Year 12, we equip our students with the capabilities and values they need to create bright futures.

Within a framework of Christian values, we provide an engaging and supportive learning experience that achieves the best outcome for the individual.

We are passionate about:

Whitsunday Anglican School has a strong academic reputation and is considered one of the top regional schools in Queensland. In recent years, the OP results have ranked alongside the best schools in south-east Queensland with extremely strong numeracy and literacy results in Years 3, 5 and 7 testing. The majority of graduating students go on to tertiary education so there is a clear focus on university pathways. Whitsunday prides itself in its holistic approach to education with strong music, sport, drama and art programs. There is an exceptional pastoral care program across the school with all students working to support the ethos of the school. With the two sub schools – Junior School Kindergarten – Year 6 and Senior School Years 7-12 all on the same campus, the School is very much a K-12 school. Senior students work with younger ones and help create a seamless progression through the whole school. The School’s Strategic and Master Plans have enabled the completion of many new facilities in recent years. The current enrolment of 860 from K-12 means the school is close to being full, with classes and year levels capped. All students from Years 4-12 have their own computer. Situated in North Mackay, only 2km from the sea and close to the southern end of the Whitsunday Islands, the school is truly in a tropical environment.

Comprehensive academic program; focus on numeracy and literacy with excellent academic results across the school but especially with OP’s. Science and computer laboratories, woodwork, theatre and Art Centre are all accessed from Year 5 up.
The School has excellent Multi-Purpose Hall; Arts Centre; Music Centre; Senior Learning and Leadership Centre; theatre; science laboratories and eight computer laboratories. There is a modern boarding house for 78 full time and weekly boarders and a new wing for the senior students has just been opened. All buildings are fully air-conditioned.
There is an extensive co-curricular program with a wide range of sport, drama and music. Also offered is a Homework Assistance and Tutoring Scheme for all students (HATS).

Our Core Values are:
1. CHRISTIANITY (through Social Responsibility) – characterized by faith in God, forgiveness, reconciliation, developing a sense of mission/purpose through service to, and compassion and care for others;
2. TOLERANCE (through Respect) – characterized by openness to a broad range of ideas and concepts, accommodation of multi cultures and faiths, and inclusivity of a wide range of backgrounds;
3. EXCELLENCE (through Effort) – characterized by the pursuit of optimum outcomes for students in their intellectual, social and artistic endeavours and underlined by our explicit strategies to assist students develop the habits of self-belief, persistence and resilience;
4. DIGNITY (through Tradition) – characterized by our expectations for a conservative approach to worship, dress, appearance, manners, language, social discourse, rituals and symbols;
5. TRUST (through Co-operation) – characterized by consideration of the needs of the group before the needs of the individual, expressed through collaboration, teamwork, honesty and consistency.
We build the future with children who learn to imagine it here.
Within a framework of Christian values provide the challenging and supportive learning experience that achieves the best outcome for the individual. 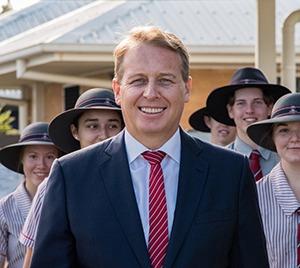 Welcome to Whitsunday Anglican School, a vibrant co-educational day and boarding school with a philosophy of personalised learning that drives an education of excellence. I trust as you look through this site you will sense the culture of our School, and get a feel for the environment we endeavour to create for our students and their families.

From Kindergarten to Year 12, we provide high quality teaching, and the time and support needed, to promote each student’s individual success. We find children learn best when they are happy, challenged and supported.

At the heart of our Whitsunday Anglican School Community we embrace Christian values and principles that ensure we pursue the best educational aspirations. Christianity through social responsibility, Tolerance through respect, Excellence through effort, Dignity through tradition, Trust through co-operation are the enduring Christian values that combine to give character to the tone of the School.

We are a Top 25 School in Queensland and the number one performing school in the Mackay region, based on consistently high NAPLAN results. Our Year 12 graduates step into life ‘beyond school’ confident, well equipped and ready. In 2020, 100% of our graduates were accepted into their university degree or vocational pathway of choice.

In our Junior years, we also attain excellent results and we are ranked QLD’s leading regional school for Year 3 and Year 5 NAPLAN results. However, most importantly, our Junior School delivers a balanced education that fosters a love of learning to last a lifetime.

There are many factors involved in our success, but perhaps the most striking is the investment made by teachers, parents and our students themselves into education. Staff at Whitsunday Anglican School are highly trained in their specialist areas. They are passionate about their work and genuinely care about their students.

We also value and welcome a close working relationship with parents and their active involvement in our increasingly international school community. In addition, we are exceptionally proud of the high standards our students set for themselves. They are motivated and encourage each other through positive attitudes, behaviour and application.

Our students are guided by a values framework and the School Motto, Spiritus Scientiae, the Sprit of Knowledge and we encourage them to be active participants in the wider community. They have the opportunity to ‘serve’ others locally and internationally, including trips overseas (for example to help build village facilities) or closer to home. We also offer many opportunities for students to develop their personal interests and passions, including in Sport, Music, Drama, Travel, Culture, Literature or STEAM (Science, Technology, Engineering, Arts and Maths). The School encourages the pursuit of knowledge and service to others and to do this in an atmosphere where integrity, empathy and compassion are learned through authentic experience.

As a School we are highly active in the local community. Each year we host key events including the Whitsunday Voices Youth Literature Festival (the largest writers festival for young people in North and Central Queensland); and the Mackay Sony Foundation Children’s Holiday Camp, an affirming event for children with special needs who are looked after for three days by our senior students. Our School is diverse in backgrounds, cultures and beliefs, enriching our school community and fostering friendships, respect, empathy and inclusion. As a parent myself, I know intimately how important the decision on where to send your child to school is. I have no hesitation in assuring you that your child will receive the individual support, guidance and care they need to thrive at Whitsunday Anglican School.

We value academic rigour and a wide range of curricular and co-curricular pursuits including STEAM (Science, Technology, Engineering, Arts and Maths), English and Literature, Technology and Innovation, Sport, Music, Drama.

Staff and parents alike will tell you that our students are motivated to perform, with a passion for learning. They understand the expectations of our School and they willingly deliver in learning outcomes and responsible behaviour.

Our students are encouraged to ‘think for the future’ and outside the box, confidently forging creative solutions for tomorrow’s world.

Our students are supported to learn critical emotional management and interpersonal skills that are essential for future success and wellbeing. We have partnered with Melbourne’s Swinburne University to be the first in our region to implement a leading Emotional Intelligence program for students.

Students at Whitsunday Anglican School are offered life-enriching cultural and travel experiences, thanks to our Global Learning and Cultural Exchange programs.

Our students are diverse in backgrounds, cultures and beliefs, reflecting the real world, enhancing our community and fostering friendships, respect, empathy and inclusion.

Parents choose our school because of the strong values that are interwoven into its fabric. Our values encourage our students to ‘serve’ others, creating future citizens that actively contribute to community.

Based in Mackay, adjacent to the beautiful Whitsunday region of the Great Barrier Reef, we are one of Australia’s leading regional schools. At Whitsunday Anglican School we combine the best of country hospitality with the high standards and opportunities of a premier city school, at a much more affordable price.

Meet some of our Old Scholars

At Whitsunday Anglican School we value our network of past students and love to hear about what they are up to in their lives after School. All WAS scholars are part of our ‘Old Scholars’ community once they leave the school and are invited to reunions and networking events to enhance professional connections and simply catch up.

Imaan Ashraf has an impressive list of accolades to her name. The 2018 School Captain is now studying Medicine at James Cook University in Townsville and is well recognised in the community, winning a number of awards. Imaan has been recognised for her efforts in creating awareness of Islamic culture and was named a finalist Outstanding Young Achiever in the Queensland Multicultural Awards.

After finishing school, James studied a Bachelor of Communication Design at QUT. James is an animator who co-founded a company called Zerply which is based in San Francisco. He has worked on movies including Avatar, Iron Man 2, Happy Feet, Madagascar 3: Europe’s Most Wanted, The Chronicles of Narnia: Prince Caspian and The Hobbit: An Unexpected Journey.

Along with a friend, Mark became fixed on paddling the length of the world’s biggest river, the Amazon and they became the 7th and 8th people ever to do so, taking 153 tough days and travelling more than 6000km. In 2012, Mark became the first person in history to kayak the entire length of North America’s longest river system, the Missouri-Mississippi, travelling over 6000km. Mark and his family now live in Malawi, Africa. He is the Chairperson for the implementation of the Judo for Peace program at the Dzaleka Refugee Camp and his partner is the British High Commissioner.

Dr Brendan Brieffies completed his Bachelor of Veterinary Science at James Cook University in Townsville in 2015. Brendan joined the Clermont Veterinary Surgery not long after graduation where he is now an Associate Veterinarian.

After completing a Bachelor of Dental Surgery at James Cook University in Cairns and receiving the University Medal for academic achievement, Joseph returned home to Mackay and worked for Mackay Hospital & Health Service. He has now relocated to the United States to undertake further studies at the prestigious Ivy League University of Pennsylvania. Only one resident is accepted yearly into post-graduate residency. Joseph is studying a 4-year dual specialty in Periodontics-Orthodontics.

Caroline Graham started her Journalism career at the Daily Mercury and is now an award winning journalist and university lecturer, who teaches journalism and creative writing at Bond University. She is also the co-writer/co-producer of Lost in Larrimah, a six-part literary true crime podcast published by The Australian in 2018. The series won several awards, including a Walkley Award.

In 2021, former School Captain Jake Magro was named a finalist in the AFR Top 100 Future Leaders. With past roles including Beta Alpha Psi USYD membership director, Amnesty International Club administrator, and Zonta Club treasurer, Jake’s experience has allowed him to continually grow in all facets of leadership. He was awarded the USYD Sydney Scholars Award Scholarship following his grade 12 results and is studying a Bachelor of Commerce & Advanced Studies at the University of Sydney.