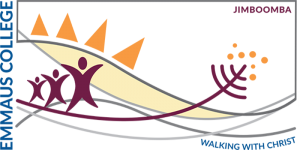 Emmaus Primary School opened in 2002 as an ecumenical school fostering Christian unity. It initially started with Preschool to Year 4 students and went on to enrol Year 6 and 7 students at the beginning of 2003. The Primary School had an enrolment of over 400 students by the beginning of 2006. Master planning allowed for options, depending upon growth, to extend to a three stream primary component.

A Working Party for the provision of secondary schooling in the Beaudesert Shire concluded its work in June 2003. A proposal was put to the Executive Director, Brisbane Catholic Education, for the provision of a secondary component to be constructed on the site of, and to the east of Emmaus Primary School. The recommendation was put to the Catholic Education Council, and then forwarded to Archbishop John Bathersby for final approval. Subsequently, BCE Executive decided that the secondary component of the College would be ecumenical. The College will continue the tradition of strong community orientation under the guidance of the Pastoral School Board.

The proposed secondary component of the College was to enrol Year 8 students in 2006, extending to Year 12 by 2010. Master planning will allow for three streams of primary students and five streams of students in the secondary school.

In 2005 the school became known as Emmaus College and is a master planned, coeducational, P-12 ecumenical College.

A further study was conducted into the feasibility of the establishment of a junior secondary school at Beaudesert. The outcome of this study has implications for Master Planning for Senior Secondary, in particular, and partnership arrangements with Emmaus College, in general. Outcomes of the study will be explored and the Master Plan adjusted where necessary.

The site is situated within the Catholic parish of Browns Plains. There exists a large Catholic primary school in Regents Park of around 600 students. St Mary’s Primary School at Beaudesert has an enrolment of approximately 390 students. These schools, along with a number of State schools in the region, are feeder schools into the secondary section of Emmaus College.

Welcome to Emmaus College.  It is our aim to provide a learning environment that nurtures young people’s gifts and abilities and enables them to reach their potential.  The staff of Emmaus College is privileged to share with you, as partners, in the education of your child.  We hope that at all times you will find us a welcoming and Christ-filled community.

Emmaus College has developed a future-focussed Vision for Learning based on the latest educational research and pedagogical practices.  Staff members have created a dynamic learning environment that maximises learning outcomes and caters for diversity.  The Emmaus College Vision for Learning is centred on six key words – Learning is:  Creating, Inquiring, Reflecting, and Learners are:  Interactive, Persistent and Hope-filled.

The wellbeing of our students is paramount, with an extensive pastoral care program supporting the young people in our care.  As partners in education, we will continue to journey with our families as we walk together, so that we may be able to achieve our vision of ‘Excellence in learning within a contemporary Christian community’.

I trust that our partnership will be of benefit to your child and we look forward to meeting and working with you to develop a truly Christian environment here at Emmaus.